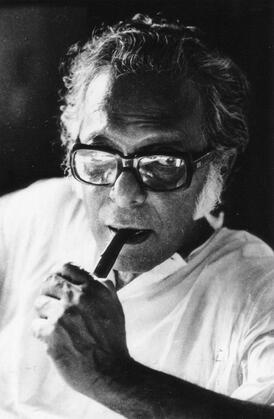 ​Mrinal Sen was born on May 14, 1923, in the town of Faridpur, now in Bangladesh. After finishing his high school there, he left home to come to Calcutta for studying physics. During his student days, he got involved with the cultural wing of the Communist party. Though he never became a member of the party, his association with the Indian Peoples Theatre Association brought him close to a number of like-minded cultural people.

His interest in films started after he stumbled upon a book on film aesthetics. However his interest remained mostly intellectual, and he was forced to take up a job of a medical representative, which took him away from Calcutta. This did not last very long, and he came back to the city and eventually took a job of an audio technician in a Calcutta film studio, which was the beginning of his film carrier.

Mrinal Sen made his first feature film in 1953, which he soon tried to forget. His next film, Neel Akasher Nichey (Under the Blue Sky), earned him local recognition, while his third film, Baishey Shravan (Wedding Day) was his first film that gave him international exposure.
(continued below)


After making five more films, he made a film with a shoe-string budget provided by the government of India. This film, Bhuvan Shome (Mr. Shome), finally launched him as a major filmmaker, both nationally and internationally. Bhuvan Shome also initiated the “New Cinema” film movement in India.

His next few films were overtly political, and earned him the reputation as a Marxist artist. This was also the time of large-scale political unrest throughout India, particularly in and around Calcutta. This phase was immediately followed by a series of films where he shifted his focus, and instead of looking for enemies outside, he looked for the enemy within his own middle-class society. This was arguably his most creative phase and won him a large number of international awards.

Mrinal Sen never stopped experimenting with his medium. In his later films he tried to move away from the narrative structure and worked with very thin story lines. After a long gap of eight years, at the age of eighty, he made his latest film, Aamar Bhuban, in 2003.

During his career, Mrinal Sen’s film have received awards from almost all major film festivals, including Cannes, Berlin, Venice, Moscow, Karlovy Vary, Montreal, Chicago, and Cairo. Retrospectives of his films have been shown in almost all major cities of the world.

Apart from his films, he has also received a number of personal honors.  He received the Padma Bhushan, and in 2005 he was awarded the Dadasaheb Phalke Award, the highest honor given to an Indian filmmaker, by the Government of India. He was also an honorary Member of the Indian Parliament from 1998 to 2003. The French government awarded him the Commandeur de l'ordre des Arts et letters (Commander of the Order of Arts and Letters), the highest honor conferred by the country. In 2001 The Russian government honored him with the Order of Friendship. He has also received a number of honorary Doctorate degrees from various universities. Mrinal Sen was the president of the International Federation of the Film Societies. He also served as member of International Jury at various film festivals, including Cannes, Venice, Berlin, Moscow, Karlovy vary, Tokyo, Tehran, Mannheim, Nyon, Chicago, Ghent, Tunis, and Oberhausen.

During the last fifteen years of his life, after making his last film, he completed a number of books, including his memoir, Always Being Born, and My Chaplin, a tribute to his lifelong hero. He received a number of lifetime Achievement awards during this period, including Osian's-Cinefan Festival and by the International Film Festival in India. His health started to fail towards the end, and after losing his lifelong partner, Gita, in 2017 he lost his will to live and died on December 30, 2018.

This web-site is created and maintained by me and my wife Nisha. We wanted to share with others some of the photographs and documents we happen to have. This is not an organizational effort, but just a personal web-site about my father, Mrinal Sen.
Most of the photographs here were taken by Subhash Nandi or Nemai Ghosh. These are copyrighted materials, and cannot be reused without express permission from the photographers.

Kunal Sen & Nisha Ruparel-Sen
(you can contact us at "kunal at mrinalsen dot org" -- of course it has to be typed differently, but this is my feeble attempt to reduce the number of unsolicited e-mails).